This case study focuses on the back analysis of the particularly challenging East Approach cut-and-cover tunnels section of the project, which has recently been completed. The results of the back analysis showed the ground stiffness to be consistent with other published data.

Ove Arup and Partners Hong Kong Ltd were commissioned by DJV to carry out the detailed design.

The construction and monitoring method used to build the 700m long section of cut-and-cover tunnels to the north of Sheung Shui station has been described in detail by Storry et al (2005). It involved excavations of up to 14m deep and 20m wide, within 1.5m of the live KCRC East Rail mainlines and within 1m of the Dongjiang Watermains, which supply Hong Kong’s potable water from China. Control of ground movements was critical to minimise disruption.

The full length of the East Approach cut-and-cover tunnels was split into sections to facilitate construction. These were formed within temporary sheet-pile wall box excavations varying from 8m to 20m in width. The figure below shows one of the strutted sheet-pile excavations under construction sandwiched between the live railway and the watermains.

The system of monitoring instrumentation was a key component in satisfying the railway operator and Water Supplies Department (WSD) of the robustness of the design and the suitability of the construction methods. The instrumentation included: 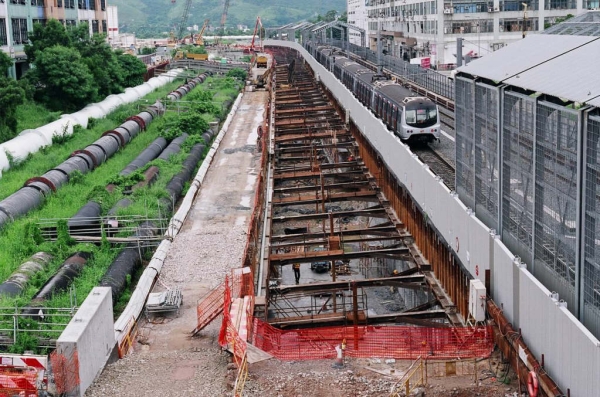 The design of the retaining walls and the strutting sequence was done using the OASYS Frew software, which outputs the lateral displacement of the pile face. To convert this into vertical and lateral movements behind the wall, the recommendations of CIRIA Report C580, on the soil deformation analysis and radius of influence were adopted.

Inclinometer monitoring of the sheet-pile wall confirmed that the displacements of the retaining walls were well within those predicted by the design.

Back analysis was carried out based on the observed wall deflections to determine the actual ground stiffness.

The construction sequence at these sections can be summarised as follows: 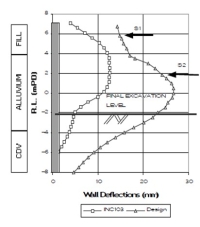 A comparison of the predicated and actual wall movements are shown.

It can be noted that the actual wall deflections were less than those predicted during design. This is considered to be due to the adoption of conservative soil parameters, actual ground water levels about 0.5m below the design water levels and live loads from the trains not being permanently applied.

Back analysis was carried out by enhancing the soil stiffnesses to obtain a best fit of the wall deflection profile. Corresponding wall deflections are shown below for steps taken to ‘match’ the measured wall deflections, which can be summarised as follows:

A detailed discussion of the back analyses is available in the Pan et al paper.

In general, the back-analysed stiffness values compare favourably with case histories of other excavation projects in Hong Kong.

As for the effects of wall friction, this is dependent on the condition of the sheet-pile and the method of installation. The back analysis demonstrates that the wall friction could lie between 0.5 and1.0 Æ’.

The LDB201 East Approach cut-and-cover tunnels have been successfully constructed within a narrow strip of land 1.5m from a live railway and 1m from one of Hong Kong’s primary water supplies.

The Kowloon Canton Railway Corporation (KCRC) constructed the the 7.4km Lok Ma Chau Spurline section of the rail crossing between…