With the aim of creating a new ‘living link’ between the University of Limerick’s established campus and its developing annex across the river Shannon, architects Wilkinson Eyre and structural engineers Arup designed the 230 metre long pedestrian bridge to create an organic link between the landscape, bridge and user.

The six independent spans join at the river’s islands on tetrapod piers.

The global analysis was carried out using the Oasys GSA software program. The typical 44m span was modelled in isolation from the structure and as a series of spans to idealise the dynamic interaction between the spans. The computer idealisation of the typical bridge span is a 3D skeletal space frame model consisting of beam elements, which were used to obtain the critical load effects in the structural members. The results of the GSA model were used to size the structural members, determine the dynamic behaviour of the bridge under pedestrian loading and in particular dynamic response factors, and to provide the parameters for the wind tunnel testing.

The 1.8 metre diameter piles supporting the tetrapods were modelled using the Oasys Alp program to obtain critical load effects along the pile length. A number of models were created to represent the bridge deck, tetrapod and supporting piles, to demonstrate the interaction between the structural elements and confirm the assumptions used in the bridge design.

A number of local finite element models were created to model specific connection details at the end anchorages, and also at the interface between the compression strut, circular hollow section, transverse girder and Macalloy bars. 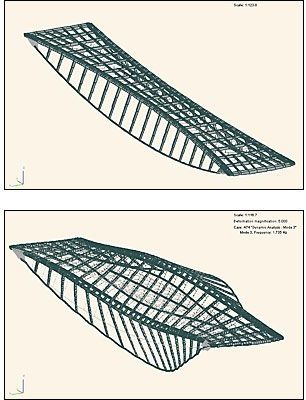 The bridge was fabricated in France and shipped as modules to site for installation.

"This footbridge is an elegant and exciting demonstration of the structural engineer's art."

Achieving the ‘Greenest Games Ever’, the Geotechnical Engineers Challenge The bid to host the 2012 Olympic and Paralympic Games included…