Achieving the ‘Greenest Games Ever’, the Geotechnical Engineers Challenge

The bid to host the 2012 Olympic and Paralympic Games included a commitment to achieving “the most sustainable games ever”. Despite cost and time constraints the Olympic Delivery Authority (ODA) had to achieve this goal. As such, the Authority asked geotechnical engineers to adapt many aspects of the design and construction of the Olympic Park to become more sustainable.

To keep to their promise, the ODA developed a set of 12 Sustainability Objectives that all their delivery partners were required to implement.

The engineers working on the Olympics had to incorporate the objectives into the designs and the following targets were set to give more specific requirements:

The requirement for CEEQUAL accreditation was particularly pertinent as all statements had to be evidence based so designers were required to provide drawings, calculations and meeting minutes and record their actions accordingly.

The Olympic Park involved extensive landscaping. A large amount of geotechnical design incorporated reinforced earth design. Splayed reinforced soil design was selected for the bridge abutments, not only for the aesthetic aspects, but for its contribution to ecology. The splayed reinforced soil reduces the Urban Heat Island Effect and provided opportunities for planting and habitat creation.

The strengthened earthworks design also provided opportunities to incorporate sustainability but, for such an extensive site with interweaving rivers, this added to the geotechnical constraints.

The geotechnical design for the strengthened earthworks around bridges and rivers incorporated basal reinforcement and for significant retained heights, the reinforced soil slopes were founded on Vibro Concrete Columns (VCC). Initially 2,700 VCC’s were proposed to satisfy design standards and account for uncertainty in the ground conditions. On-site testing was proposed, which meant that the VCCs needed could be measured precisely. The on-site testing resulted in a significant reduction in the number of VCCs required across the project from 2,700 to 2,000 – saving on average £500 per unit and delivering significant time savings on the construction programme.

Engineers also used Oasys Slope to assess slope stability. Oasys Slope enabled easy incorporation of basal reinforcement into the design of slopes and the ability to assess the risk of flooding to the slopes. The design guidance also allowed for the departure from standard materials such as Class 6I fill to cater for the target to re-use material. Consequently, where polymer geogrids were used for shallow slopes, materials from on site fill sources were considered and it was critical to assess the impact of these materials on the slope stability of the proposed strengthened earthworks.

Understanding the geometry of the site was also critical. A number of cross sections were considered for each slope to assess the extent of VCCs, basal reinforcement and the suitability of on site fill instead of standard reinforced earth fill.

Bridges with integral abutments are characterised by two major advantages; firstly that expansion joints and bearings are omitted, reducing the maintenance and whole life cost of the bridge and secondly that the superstructure is restraint at the end supports, such that end moments counteracting to the field moments leads to bridges with a small construction height. This saves on material, meeting a crucial requirement for sustainability.

However, the geotechnical analysis of integral bridge abutments is not straightforward. The soil, embankments, abutments, piers and bridge deck must all be considered as one compliant system and this presents a challenge for load distribution calculations.  An important aspect of integral bridge design is the modelling of the soil-structure interaction. For abutments with vertical piles and particularly those with only a single row, shortening of the superstructure due to creep and shrinkage and movements arising from traction forces, induce bending moments which are directly related to the combined stiffness of the pile and the surrounding soil. To calculate bending moments in the piles, the stiffness of the soil must be included.

The Engineers needed to use a simple method of analysing the soil-structure interaction to identify the effect and sensitivity of critical design parameters and to quickly develop a variety of options. The level of design should enable the most suitable scheme to be identified and then taken through approvals and detailed design.

The analysis of soil structure interaction needed to address several different loading conditions, each of which can have a critical effect on the integral bridge and involve the interaction of deck movements (displacements and/or rotations) and the soil resistance on the back of the abutment.

These can be summarised as:

Oasys Frew was used with guidance from BA 42/96 to quickly and conservatively analyse the complex problem. The design experience gleaned from the Olympic Park Project was used to further develop Oasys Frew, which now incorporates integral bridge design. 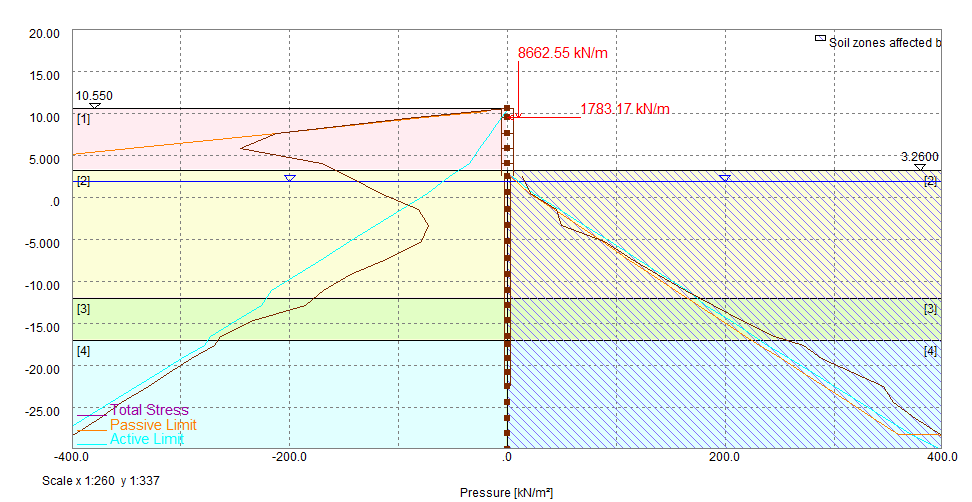 The Olympic Park design was an opportunity to showcase innovation and to set a new sustainability bar for the designers. The examples discussed show how research, cutting edge analysis and exemplary design deliver sustainable results. The following quote demonstrates how the impact of the engineers on sustainable design has left a legacy.

“Setting the bar high means that this level of design will need to be sustained by Geotechnical Engineers in the future”.

A video presentation showcasing some projects that have utilised Slope.