Arup was approached to conduct a Quantitative Risk Assessment by a client who owned a large portfolio of existing buildings with a variety of design and construction defects. The aim of the project was to inform the client of the risk associated with two of their buildings and what measures they should take to reduce their risk most efficiently.

Arup already had Finite Element Analysis (FEA) models in Oasys GSA of the buildings as part of an earlier investigation into the client’s properties. However, the relevant models were created for typical code standards and did not have the level of detail needed to accurately represent the current building conditions: the models needed to be as realistic as possible to allow the team to quantify the level of risk in the buildings. This meant the inclusion of all aspects thought to be contributing to the buildings’ stability, including structural and non-structural components, as well as known and unknown associated defects.

As the condition of every element in the building cannot be known with certainty, a probabilistic modelling strategy using estimated levels of uncertainty based on inspection results combined with a Monte Carlo simulation, was used to predict the likely present-day building behaviour. This was done by the creation and analysis of thousands of building models, effectively capturing most of the conceivable conditions of the present-day building, and thus enabling the calculation of risk for each building. The risk was then used to inform the programme for the remediation and refurbishment of the buildings, as well as calculating how much the risk would reduce as a result.

One of the main challenges was to create thousands of independent models in either the current or refurbished condition, analyse the models, and record useful results. The models created were derived from an original base model, one for each building. To capture the risk profile, the buildings needed to be analysed under a variety of realistic conditions. With the predominate hazard (demand) being wind, multiple wind directions and magnitudes were used in the analysis, associated with the likelihood of occurrence.

A team of experienced engineers created the detailed base models from the existing GSA files. The new models included all the buildings’ components, which were set up to allow each to be switched on or off. Each component also had their own material and section, allowing the script to adjust each individually to simulate possible levels of degradation such as corrosion or incorrect installation. New models were then created from the base model, with components adjusted or deactivated randomly (with the likelihood based on the assessed conditions), loaded (with the magnitude and direction also determined in accordance with the agreed probabilities), analysed, and the results stored.

Below is a side view of one of the base models.

A Python script was developed to record the building model data using GSApy, an Arup-produced Python wrapper for GSA’s COM API (application programming interface). This script pulled information from all load cases and elements from the base GSA model, which was stored and inputted to a further group of scripts written as the Risk Engine. The Risk Engine used probabilities, supplied by surveys and engineer interviews, to determine “realisations” or scenarios: where components in the building were modelled as deficient and what loading they were to be subjected to for that iteration.

At the beginning of each iteration the prepared base model was opened and stored as a mutable object using GSApy. Using the model object and Risk Engine, each building component was then modified using a combination of GSApy and COM commands to reflect the deficiency assignments and corresponding consequences in the model. GSApy was used to extract and validate element information from the object, making it an easier process.

Using GSA, each member’s demand and capacity ratio was calculated, and the information then used in the risk calculations, informing whether the model suffered any failures. Additionally, storey drift information was collected, with deflections of specified nodes recorded and averaged to give insight to overall building behaviour and model accuracy. The data from this and the other realisations was then stored in a database for further analysis. 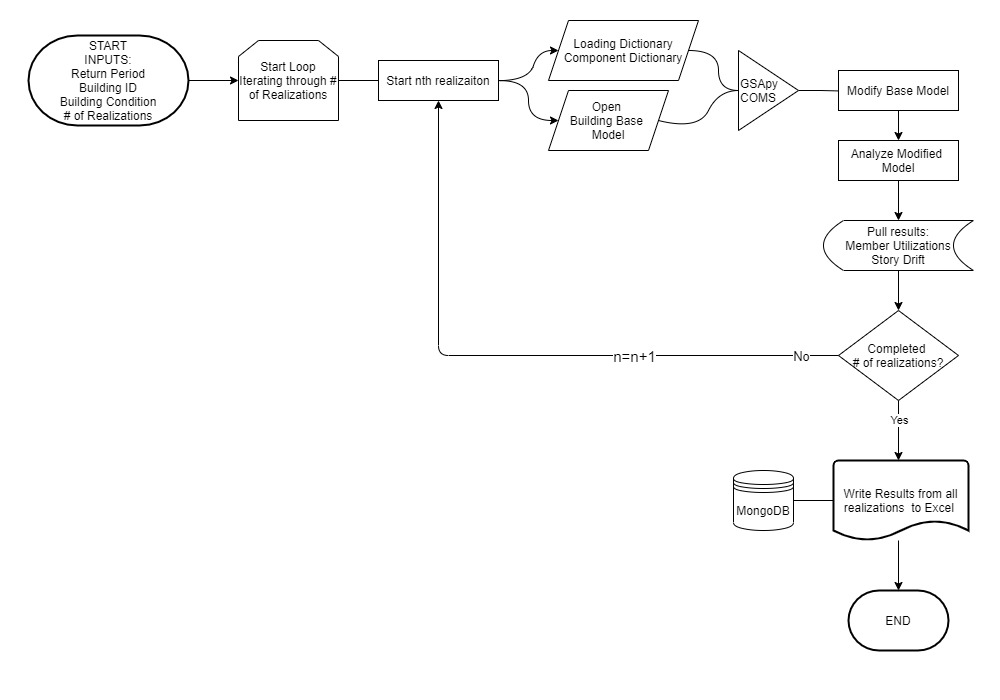 The thousands of probabilistic analyses required to quantify the risk of the existing buildings would not have been possible without the use of Oasys GSA. The relative ease of creating and analysing all possible models with GSA and GSApy enabled this valuable study for the client, helping them to prioritize the next stage of their property portfolio refurbishment.