The Camp Adventure Forest Tower opened in the summer of 2018 and is part of an existing sports facility that incorporates treetop climbing paths and aerial ziplines into their list of adventurous activities. Located one mile south of Copenhagen in the beautiful forest of Gisselfeld Klosters Skove, a striking hyperboloid lattice structure towers over the trees presenting its kilometre-long board walk that spirals up towards the sky. The boardwalk appears as if it is floating through the 45-meter-tall hyperboloid diagrid tower. The Forest Tower combines architecture and structural analysis with its surrounding landscape to achieve the ultimate visitor attraction that has been named one of TIME Magazine’s World Greatest Places in 2019.

There are 36 straight tubular steel columns that create the doubly curved form by rotating 120 degrees about a 28-meter diameter circle. This produced a stiff structure when combined with the spiralling ramp ring which is a doubly curved element that cantilevers from the straight columns from the bottom to the top, making the total length of the structure 640 meters. The ramp ring supports the beams and provides the columns with radical restraint. Mathematical principles for the helical curve are mapped to a hyperboloid surface with a constant slope up the tower, enhancing visitor experience and making an adventurous activity accessible to all.

This remarkable structure was at first deemed impossible to create, however, through using a parametric system and adopting an engineer-architect relationship, it became quite simple. The aesthetic and commercial success of the structure was obtained by the cooperative digital workflow for the main geometry which allowed time for clarifying and developing details to relay to the contractors.

Grasshopper was used in Rhino 5 alongside Karamba 3D and Geometry Gym and a variety of other plugins. This enabled for high level structural analysis, design, and delivery in a parametric framework. The coordination conducted in Grasshopper code, ensured that the accuracy and perfect harmony of all Oasys GSA analysis models, architectural depictions, and BIM deliverables were met. This allowed time to focus on connection detailing and the organisation of required complex computational analyses in Oasys GSA. The hyperboloid lattice structure was created by using mathematical geometry, building on engineering heritage whilst using 21st century techniques resulting in a unique destination experience accessible to all, regardless of an individual’s physical conditions. 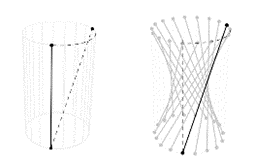 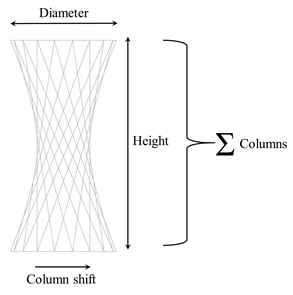 Through the strong relationship between the architects and engineers and the adoption of automation workflows, this structure was a triumph in terms of achieving complexity whilst capturing the naturistic landscape through the structure itself. We are honoured to have been apart of this project using our innovative software to be able to complete such a composite, beautiful structure. Alongside being crowned one of the greatest places in the world, the structure was also awarded the Best of Best (concept) German Design Council, ICONIC Award 2017 and was the winner of South Coast Denmark’s Best Tourism Initiative 2018.

Find out more about Oasys GSA here or visit our YouTube channel to watch a variety of videos about GSA and our other structural analysis software products.