The elegantly curved 3.5km Helix footbridge with its four cantilevered viewing pods is a focal point of Singapore’s Marina Bay development. Its design, inspired by the double helix of DNA, is so innovative it is an entirely new classification of bridge structure.

While a single helix would untwist when it is loaded, two helices can form a bridge when they run in opposite directions and interconnect by a series of struts and tie rods – reminiscent of the double helix of DNA with its base chemical bridges.  The rods connect the two spirals together and, at the same time, maintain the consistent distance between the spirals. This gives structural strength and stiffness to the bridge, making it a competent structure.

From the outset, the project brief posed several design challenges: the bridge was to be curved to join the foreshore promenades on either side seamlessly; it needed to be lightweight to create visual contrast with a neighbouring 6-lane vehicle bridge; and it had to provide shade and shelter against direct sunshine and heavy rainfall. These factors, together with the desire to create a landmark structure, led to a novel and unique design by architects, the Australian Cox Group and Singapore-based Architects 61,  and presented structural engineers at Arup with an intriguing project.

The resonance of structures with low damping levels, such as footbridges, is extremely sensitive to footfall rate. One of the main concerns during the design stage was the risk of lateral synchronous vibration (LSV) – the phenomenon infamously responsible for excessive vibrations felt on London’s Millennium Bridge on opening day. When LSV occurs, pedestrians walking across a bridge progressively lock in step as they attempt to balance themselves laterally. This induces a build-up in vibration on the bridge deck and generates a phenomenon where the level of vibration increases with time. Arup has contributed a substantial amount of research on the topic and recommends that the fundamental frequency for the lateral mode be at least 1.5Hz.

On this bridge, there is also a series of ovular-shaped cantilevered viewing ‘pods’, each with capacity for about 100 people, that extend out on the bay side to create ‘ring-side’ viewing for water events and firework displays. So, footfall and vibration analysis had to consider scenarios when the bridge was crowded to capacity with heavy loads on the one side where all the viewing pods are suspended. Other project specific considerations included thousands of marathon runners crossing the bridge in quick succession, the Singapore Big Walk event, and or the bridge split into running and walking lanes.

The soil surrounding the piles is predominantly very soft marine clay so the pile was modelled together with the bridge structure using Strand 7 finite element analysis to take into account the soil–structure interaction effects.

Modal testing ascertained the dynamic properties of the bridge and calculated the critical damping ratio. These tests also investigated the level of vibration that would be generated by small groups of people jumping – such as the behaviour of a jubilant crowd engaged in celebrative events on the bridge. Two mechanical shakers generated vibrations using statistically uncorrelated random signals at varying locations on the bridge spans and on the cantilevered pod areas.

Footfall analysis was carried out using Oasys GSA. The GSA footfall analysis assumes a single-person (mass 76kg) excitation approach.  The single-person excitation method compares the predicted level of vibration caused by a single person walking at the most critical footfall rate. Many codes explicitly recognise this as the basis for their code checks, and this method has generally ensured adequate vertical dynamic performance of external footbridges over the last 50 years. Calculations based on single-person excitation at the most critical footfall rate are satisfactory because the probability of more than one person walking at exactly the same speed, footfall rate and phase is extremely low.

Walking vibrations for human comfort are generally measured using response factors (R-factors), ratios between the acceleration from the vibration generated and the threshold of barely perceptible vibration. For example, if the response factor is 2, the vibration is twice that of the barely perceptible vibration level. Weighted factors (from BS 68414) are also generally applied to the accelerations as human perception is more sensitive to particular ranges of frequencies.

The GSA analysis output result is in the form of an R-factor. 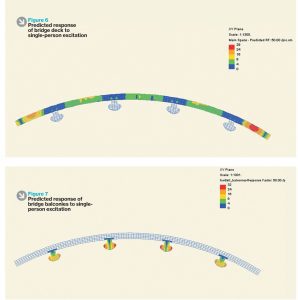 Numerical studies determined the dynamic performance of the bridge, focusing on the vertical response to single, walking pedestrians. A GSA contour plot of the vertical vibration response factor at any point on the bridge deck due to a single person walking is shown in the image slider above (originally numbered 6).

On the viewing decks, it is not possible for people to take more than 20 steps; therefore, only a proportion of the maximum steady-state response can be achieved. The response predicted on the pods by GSA is shown in the image slider above (originally numbered 7). The maximum expected response at the side edge of the viewing deck is R = 32.

The measured vibration levels of the bridge are similar to those predicted, with the exception  of the approach spans, which perform better than predictions.

The ‘real life’ study of vibration due to pedestrian crowd traffic involved around 280 volunteers from the Land Transport Authority who walked, ran, jogged and jumped to order.

Overall, the measured results were found to be in close agreement with the predicted response of the bridge. It was also shown that the level of dynamic response measured was acceptable in accordance with the latest international codes. The Singapore Helix has become a much-admired and much-used and enjoyed feature of the magnificent Marina Bay.

This case study was published in Volume 95 of the Structural Engineer, you can read the article online.

Open when schools are closed, Chorley’s purpose-built Inspire Youth Zone is run by a community charity to provide a fun…

Singapore’s ‘Future of Us’ exhibition captured the imagination of the public and inspired more than 400,000 individuals to record their hopes, dreams…