Pedestrian simulation software plays a big part in making our lives easier. As our cities and transport networks became ever more complex, and our festivals, concerts and sporting events got bigger, keeping us moving freely and safely became one of the biggest challenges facing planners. Now, of course, managing proximity and how we move adds another level of complexity.

Understanding and predicting the pedestrian movement and the resulting crowd flows is a critical part of the design, planning and day-to-day operations of any infrastructure or event, and pedestrian simulation software like Oasys MassMotion provides the tools planners need. The recent addition of proximity modelling tools is helping to manage and phase the safe reopening of facilities after lockdowns.

So how does pedestrian simulation work and how realistic can its predictions be?  We asked Yogin Doolab, a consultant on the Oasys MassMotion team to give us an idea of how pedestrian modelling works. 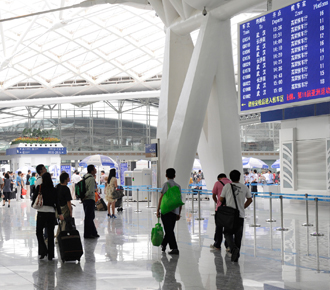 Yogin explained that the roots of understanding pedestrian dynamics go back decades, to work by architects understanding crowds moving as fluids, to studies of evacuation and safety. A quantum leap in our understanding was the idea of Level of Service (LOS), first conceived by John Fruin in the 1960s. Fruin had realised that the best measure of the effectiveness of a potential route was not how fast individuals travelled but how many passed a given point per minute: the relationship between density and speed isn’t a simple linear one and Fruin’s studies showed us how this happens  (there is actually a sweet point at which greater density doesn’t actually slow the crowd down, but add just a few more people and there will soon be congestion!).  Using the Level of Service (LOS) concept, which can be thought of as a measure of how big a group can get before movement is restricted, we can start to predict how individual pedestrians will move in a crowd.

Being able to translate this learning into a scientific understanding of movement was the next key step to modelling crowds accurately. In the 1990s, a combination of additional research and advances in computing power made this feasible. Dirk Helbing and Peter Molnar introduced the social forces model in 1995. They developed a system that represented the multiple interactions between individuals, objects, etc. They called these interactions social forces and showed how they guided the behaviour of an individual when moving in and amongst other people.

Since then, there have been many research studies conducted to determine with greater precision how people behave and choose the path they will take to get to their destination, be it getting through a ticket barrier or reaching the burger bar at a concert. 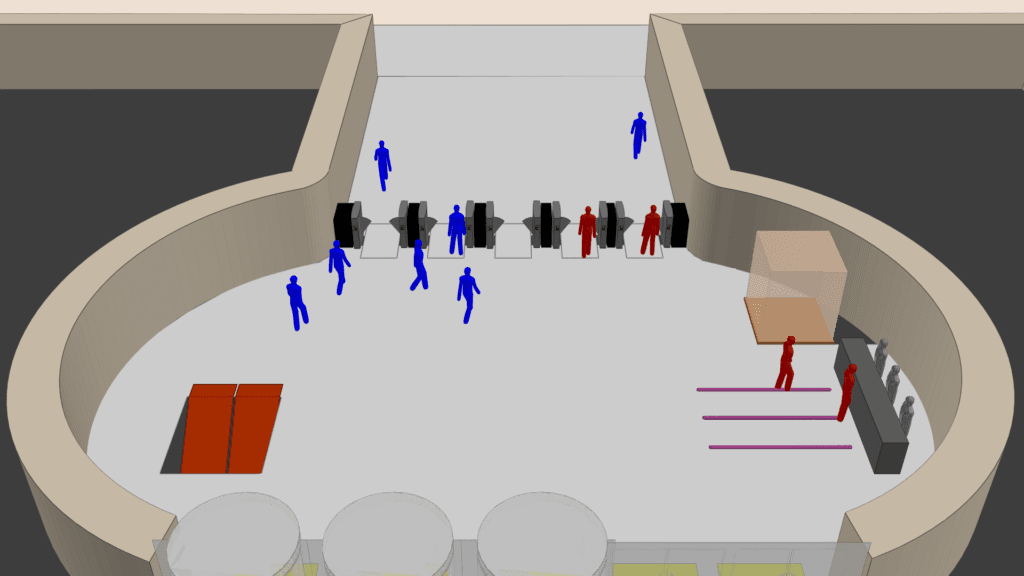 A valid and accurate pedestrian modelling technique should be able to model most, if not all aspects of pedestrian movement. For example, the software should be able to simulate how pedestrians enter/exit a given space, what happens when they meet people coming the other way around a corner, and how they react to the dynamically changing crowd density around them. It should reveal where crossflows and counter-flows might give rise to problems, and it should also be able to model random sporadic human behaviour as well.

Not surprisingly, humans being what they are, attempts to refine an existing model or introduce a new one always seems to leave a gap. So, the honest answer to “Can pedestrian simulation software model human behaviour 100% accurately?” is that it cannot – but it is getting pretty close and engineers and planners around the world do have confidence in the insights it offers.  For example, at Beijing’s new jewel-in-the-crown Daxing airport, for example, MassMotion showed how simply adding an extra escalator to the design would reduce bottlenecks at the main entrance.

Agent-based simulation tools such as Oasys MassMotion use the social forces model in combination with LOS and then also add additional data provided by the user to replicate human behaviour to the best of its ability. Additional data might be transport timetables or concert and interval times to predict peaks and troughs in footfall traffic or actual observations taken in the field to give a better understanding of how people are likely to approach a building.

With added features like action sets (sequences such as passing ticket desks, automated barriers or  security) , agent profiles (age, mobility, cultural preference to walk on one side of the road, etc) and MassMotion’s software development kit (SDK) to enable users to add new project-specific features, a user is able to customize their simulation. In addition, the MassMotion development team currently has an active research program on how to incorporate real-time data into the software to increase accuracy and enable managers to react to emerging situations like congestion caused by a faulty escalator.

With technology advances and the rapid development of  artificial intelligence and  machine learning, it shouldn’t be long until pedestrian modelling tools will indeed be able to predict and analyse any kind of human behaviour, and give us fast answers on how to avoid discomfort, danger and congestion.

In this talk Dr. Michael Kinsey from Arup Fire (China) presents an overview of research conducted looking at cognitive biases…

Paragon, a decision support services and technology consultancy with offices in Brazil and Argentina and operation in Latin America has…