Due to increasing passenger numbers, airport planners and designers are now using a range of software tools, including smart pedestrian simulation to test architectural concepts.

At Beijing’s new airport, currently named Beijing Daxing International, potential issues were spotted and resolved years ahead of the 2019 opening. Oasys MassMotion simulation was used with Simeo 3D airport simulation and Elevate to reveal and resolve future passenger flow problems. The new airport has been designed to serve 45 million passengers a year.

This is the first project in China where crowd simulation was considered to be “a critical component” of the development. The simulation and analysis of the project received unprecedented attention from stakeholders.  MassMotion added untold value by incorporating intelligent agents that react dynamically to surrounding events into the simulation. This is as near to the real world and real people as it is possible to get in a simulation.

Beijing’s existing Capital International Airport has long been operating above its 76 million annual passengers (MAP) capacity.  Now the Beijing New International Airport is under construction, with an initial capacity of 45 MAP when  it opens in 2019 growing to around 72 MAP by 2025.  Arup airport analysts based in Toronto and Beijing led by Aarshabh Misra and Fangzhou Su, started working on the project in March 2015. The integrated approach they adopted quickly resulted in several adjustments to the multi-disciplinary design.

Cross-section of levels modelled in MassMotion

The project’s detailed terminal model, built in Simio 3D, generated passenger flow data. This was used to analyse and optimise both the initial 45 MAP and ultimate facility demand of 72 MAP. Particular attention was placed on passenger processing facilities including check in, security and boarding.

The MassMotion model provided detailed information on potential bottlenecks. The passenger flow data was used to develop detailed passenger schedules and distributions to help planners avoid congestion. It was, for instance, instrumental in determining the performance of the escalators that span the front face of the terminal building. This was always going to be critical for the building’s success, and accurately modelling the behavior of people using the multi-level elevator banks was one of the biggest challenges on this project. Simulations needed to reflect varying demand at each elevator bank for each floor level at different times of day – it was a complex matrix.

To model this, the analysts developed an innovative collaboration between MassMotion and Elevate, a leading software tool that is used to test elevator capacity. Passenger profiles were generated in MassMotion for each elevator bank at each floor and exported to Elevate for assessment of elevator performance against anticipated demand.

How the analysis helped create a better airport

This approach to crowd analysis helped identify and eliminate  inefficiencies in the building layout early in the construction process. The highly visual outputs from MassMotion enabled the Arup airport analyst team to demonstrate the effects of suggested design modifications at a stage in the project when they would be relatively inexpensive to implement. The major changes undertaken included adjusting the location of the elevators and providing an additional pair of escalators on each side of the terminal facility.

See Figure 3 and 4 for snapshots of the MassMotion model and related analyses. 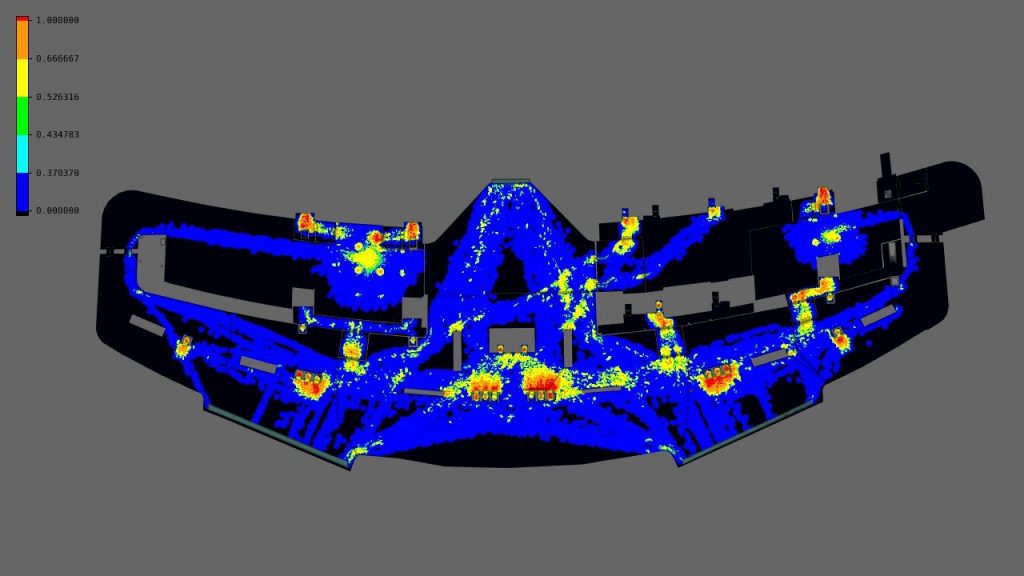 This case study was an entry in the 2018 Oasys Competition. The competition is held at intervals to enable students…

In partnership with Strasman Architects Inc (SAI), TraffMobility has developed a pedestrian simulation model using Oasys MassMotion to simulate the…

This new high-rise building in South Korea was connected to an existing mall and retail precinct, and planned to become…