The Travellers is a stunning outdoor work of art in Melbourne that sits atop of the former Sandridge Bridge crossing the Yarra River, paying homage to the waves of immigrants that have come to Australia

Arup was engaged to work closely with the renowned international artist Nadim Karam of Atelier Hapsitus, Melbourne City Council, and the fabricators Silverstone Engineering and Danfab to harmonize the artistic vision with the practical realities of the creative structure. Often the line between art and engineering is a blurred one and in the case of the Travellers installation, the line vanished, leaving only the synthesis of the vision and its realisation.

Travelling through time to create a unique design

Due to the complexity of the sculptures, traditional design techniques would have take years and extensive resources, which meant that the design team needed to approach the problem in a very different way. The first part of the concept stage was thus to develop the artist’s complex designs into 3D computer analysis models.

The artist’s vision also included nine of the 10 figures moving from the south end of the bridge to their individual locations along the bridge, turning and spinning as they travelled, returning to the south end, coming together to symbolise multiculturalism.

Designing a movement system for the figures, which are each more than seven metres tall and weighing more than seven tonnes, was a challenge for the team. Arup’s design for the bogie system and rail support system needed to fit into the very tight spatial constraints of the existing Sandridge Bridge. 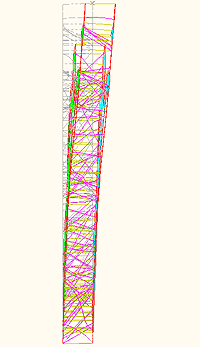 The design team realised that in order to make the sculptures constructible and practical, they would need to limit the number of curves and connections within each sculpture while keeping with the artist’s vision. To simplify the fabrication process, they decided that each figure would have no more that 47 different types of curve radii, ranging from 12cm up to 2 metres, and only four different structural sections.

Using Oasys GSA software, the Arup team tested each sculpture against a set of performance and strength based structural criteria, including directional wind and self-weight. This determined which areas in the structure were highly stressed under load, and if the overall sculpture was subject to excess sway in bad weather.

The GSA analysis quickly revealed that some areas needed additional strengthening to prevent overstress. The team then optimized the structural design to find the most efficient design, while keeping in with the limited selection of sections.

For fabrication, realising that the designs could be conveyed more effectively, the Arup team dispensed with traditional construction drawings and issued all the geometry electronically. 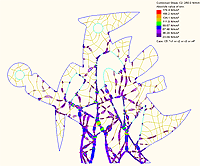 This 300 seat grandstand is located in the Valley of Chevreuse, a suburban countryside region in the south of Paris.…

‘Venue on the Green’ is a new youth centre in East Sussex, where an innovative, low cost and buildable hyperbolic…