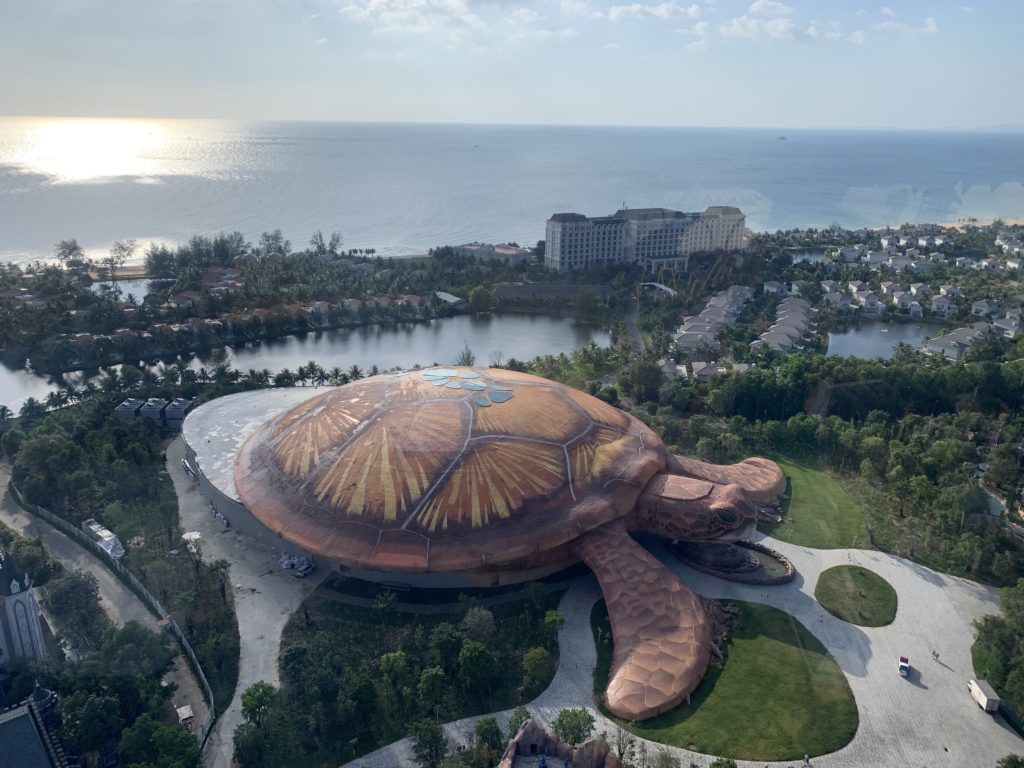 The Sea Shell Aquarium is the largest international standard aquarium located at Phu Quoc Island, Vietnam and is part of the extension of the Vinpearl Land, Vinwonder amusement park. In the shape of a sea turtle, it is a magnificent structure housing a range of ecosystems supporting diverse marine life forms. The aquarium contains 49 water tanks, including a 7-meter-deep shark tank, a giant 12-meter-deep tank and 47 other smaller tanks.

Vingroup JSC appointed Arup to design this unique building and realise the complex geometry of the aquarium structure. Arup engineers adopted an innovative structural design approach and used a variety of digital design tools, including Oasys GSA, in the structural analysis and design of the long span steel roof.

Challenges to the Team

The steel roof of the seashell is approximately 120 meters wide and 110 meters in length, with a 66 meter internal clear span. One of the key challenges the team faced for the roof design was the manipulation and rationalisation of the roof geometry, which was originally only drawn by the architect. To help simplify the fabrication and installation of the structure steelwork and the façade system, Arup initially proposed to rationalise the form based on the geometry of a torus shape. Even with this simplification to the geometry, challenges remained as they had to work with a high complex long span structure fabricated in steel, which was not a common material used for application for this type of construction in the local market and still is not. 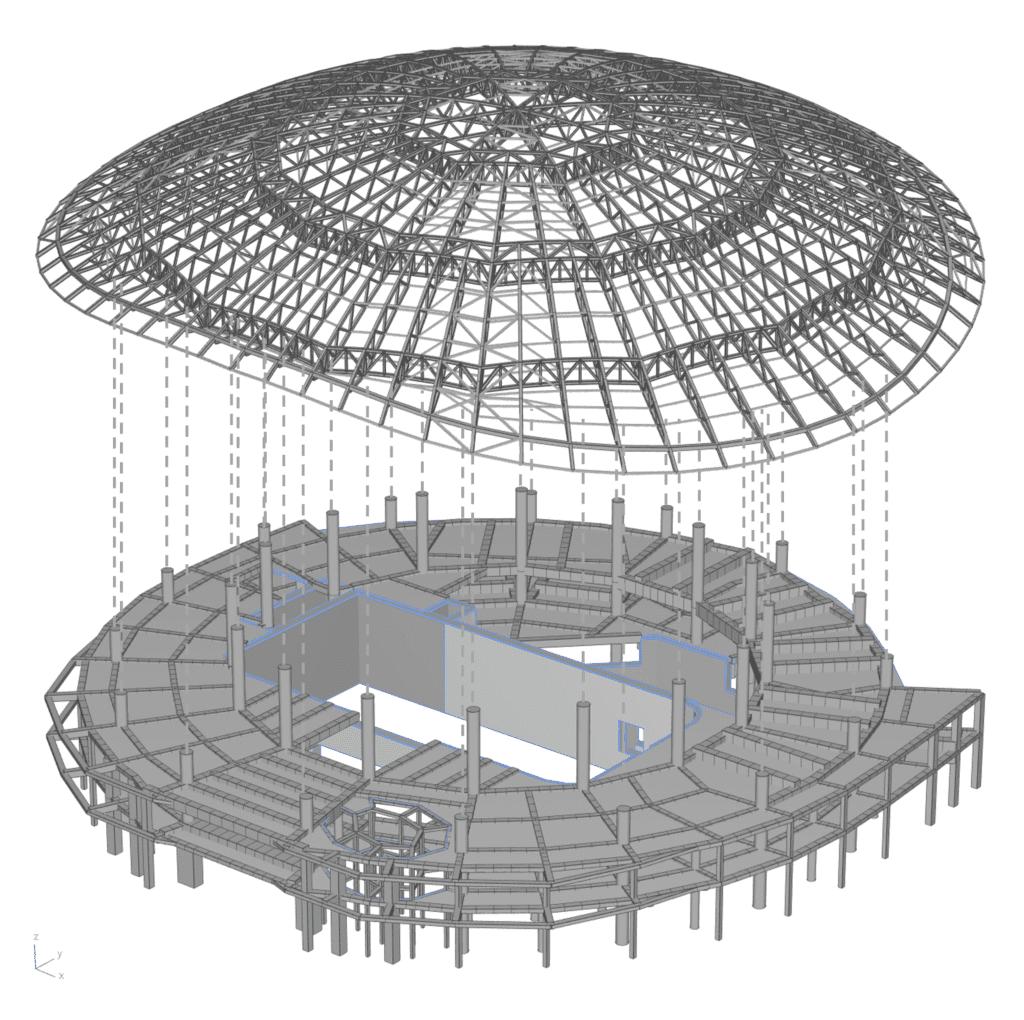 The constant refinement and optimisation of the structure along with the frequent adjustment of the geometry by the client and architect required several iterations of analysis. This meant that a digital workflow was required, making this one of the first projects for Arup Vietnam where this type of workflow was applied from the onset. This resulted in a steep learning curve for the team. In addition to these technical challenges, there was also the pressure of an especially tight timeline imposed by the client: only five months elapsed from the start of the concept design to the erection of the first steel on site.

Arup engineers used Oasys GSA to quickly and accurately analyse and design the steel roof of the aquarium, it helped to solve the model in a timely and resource-efficient manner. The software was an integral tool in the iterative overall design process – in addition to it’s technical capability, the clear and user-friendly interface, comprehensive abilities and flexibility of the result display graphics, allowed the designer to gain a deep insight into the behaviour of the structure. 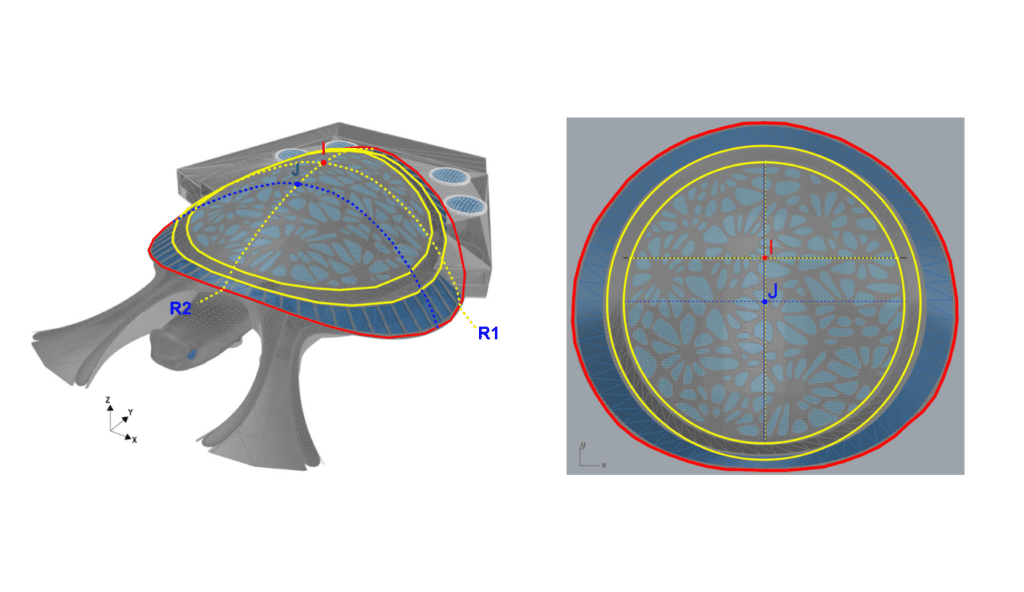 The initial roof structure design was based on a series of warren trusses arranged radially and two rings of a circumferential transfer truss system, with the whole frame supported on top of concrete columns cantilevering form the floor below. This formed clear and efficient load paths, reflected in the GSA model.

As part of the digital workflow, from the outset of the Concept Design stage, a central model was created in the modelling software Rhinoceros. At this stage of the design most of the key parameters defining the shape of the roof, the overall form, the boundary of the roof and the number and layout of the supporting columns were unknown, and so they were treated as parameters that could be varied as the design progressed. At a more detailed level, the height of the trusses, the type of connections used, and the bracing layout were also parameters that were expected to be investigated. These parameters were defined and controlled in the model through the software plug-in Grasshopper, this created a parametric model of the roof. 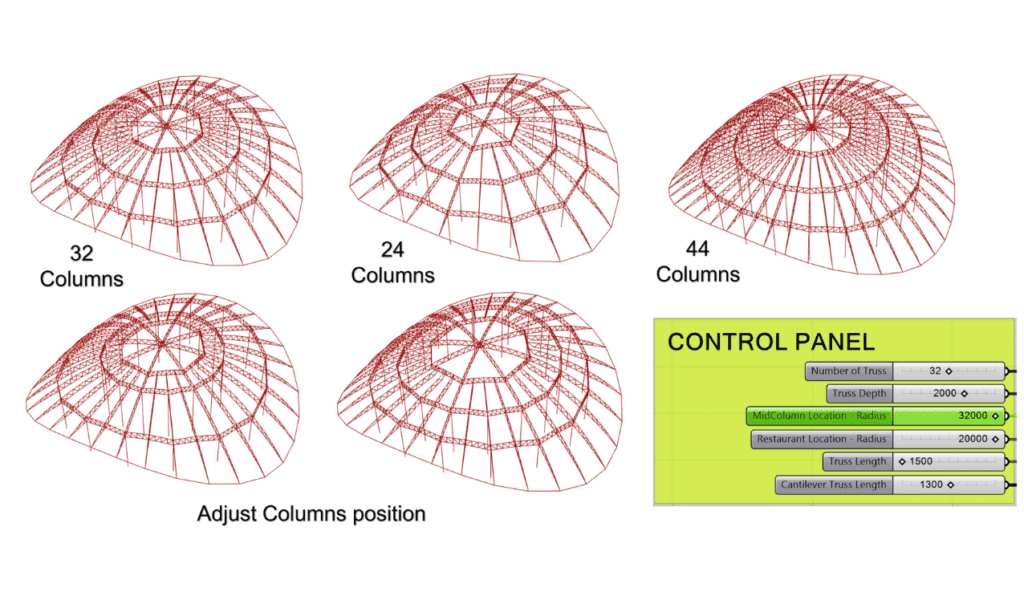 The initial geometry was exported into GSA where engineers ran the analysis to confirm the validity of the concept. Tests were then run with different configurations of the roof to find which one would work most efficiently. In this iterative process, the testing of the different configurations with the help of GSA provided fast and accurate analysis of the model, allowing more options to be investigated, and design decisions to be made on a rational, quantitative basis.

By the end of the investigation, some 20 different configurations of the roof structure had been tested. For each geometrical configuration, the GSA analysis model was automatically updated to reflect the changes in geometry and the layout of the members in the central model.

To export the model from Grasshopper to GSA, the engineers used the Geometry Gym and Ovabacus plugins, written using the GSA’s COM API. One of the Arup project managers, Kiet Tran, later said:

“Recently I tried the GH-GSA plug-in, in Grasshopper and think that it would be a better replacement of the plug-ins we used for the Sea Shell Aquarium roof since it provides more functions and is faster compared to the others.”

As the design progressed, the engineers discovered that they could maximise the repeatability to modularisation, the ease of fabrication and simplify the panel layout of the cladding system by further rationalising the base shape from a patch of a torus to that of a sphere. This adjustment was found to have minimal impact to the architect’s original geometry. The digital design workflow from Grasshopper to GSA allowed the adjustment to be made in an effortless manner.

Alongside the roof model created in GSA, the concrete building was analysed using ETABS and SAFE. From there, the concrete building model was imported into GSA with the help of the plug-in Ovabacus, for global checking. All the geometry and structural data was then exported to Revit using Speckle and Rhynamo.

Head to the Arup article to find out more about this project.

The centre piece of the 15th Asian Games was the Aspire Tower, shaped to represent a colossal torch, which for…