The Pinnacle was a 63 storey landmark building in London that made it past the piling stage but was halted when workers began excavating deep down, due to problems regarding the pre-let. The building had a gross floor area of 138,000m2 including 3 basement levels.

The proposed building was to be founded on a combination of piles founded in the London Clay and the Thanet Sand strata. Where required, the new basement walls were to be constructed within asecant pile wall.

Overview of the Geotechnical Solution

The foundations consisted of the deepest and largest built to date in the City of London at 2.4m diameter, 63m long bored piles base grouted in the Thanet Sand. Reuse of the existing underreamed piled foundations in London Clay supplemented by new large diameter bored piles and minipiles was adoptedover part of the site.

The bearing piles were also designed to resist applied lateral loads due to out of balance earth pressures and wind load. In addition, the bearing piles were to be designed for moments applied due to eccentricity of the connection between the pile and columns due to positional tolerances.

An assessment had been made of the effect of lateral loading and moments applied to the piles using Alp. For each pile diameter, plots were produced for increments of applied lateral load and applied bending moment against induced bending moment and shear force. These were used to calculate the forces and therefore reinforcement required in each individual pile.

The bending moment profiles in the piles due to applied lateral loads and moments are illustrated by the Alp plots. 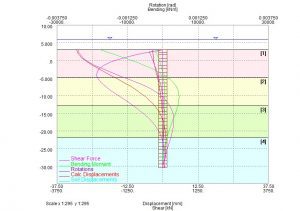 The main bearing piles at The Pinnacle were to be subject to tensile forces as a result of ground heave caused by demolition of the existing buildings and excavation of the new basement.

The calculation of tension forces in the piles due to the heave movement were required to enable appropriate design of the tensile pile reinforcement.

The pile in heaving ground was subject to shear strain. The pile’s neutral axis lies along the horizontal where the cumulative shaft resistance curves meet. The point at which they meet is known as the neutral point or point of zero shear strain. At this point the Maximum Tension Force (MTF) will occur. However the neutral point (and so the MTF) was lower in a pile and is subject to a compressive force. When there is a swelling force the MTF could be increased if the swelling force is larger than the applied compression load. This is illustrated below.

A linear elastic method was used to model the behaviour of the reinforced pile and to calculate the tensile forces generated in the pile, the maximum tensile force and required tension reinforcement. This requires an understanding of the likely heave movements in the ground and the variation of these with depth, which are calculated using Vdisp V18.2 (currently Oasys Pdisp).

The same methodology was used for the both the short term and long term loading condition.

The pile reinforcement design is specified to be the worst case of:

Consequently, pile reinforcement design was considered in both the lateral load and bending moment design and the tension design described.

These charts calculate the capacity of each reinforced section for various combinations of moment and axial force. The following load combinations were used:

The shear reinforcement in the piles was provided in the form of helical link bars. The quantity of helical links in each pile was determined using a calculation sheet which checks shear in combination with bending moment and axial force.

For all sections except the vehicle lift, the wall was to be propped in the short and long term by the permanent ground floor and basement slabs. It is noted for section 3-3 the ground floor slab does not act as a permanent prop, in this case the B1 slab acts as permanent prop.

For the section at the vehicle lift, the wall was propped by the lowest basement floor slab. A continuous ‘waling wall’ propped the wall continuously from ground floor slab level to the base of the basement.

A typical construction sequence for one of these sections is shown below: 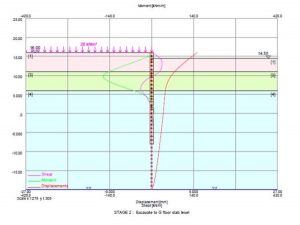 The design methodology for vertical load considers both total and effective stress design.

Shaft capacity was only assumed below the excavation level. For the effective stress design, the input horizontal effective stresses are those calculated from the Frew retaining wall analyses. Because the wall was carrying vertical loading, wall friction may not be generated on the back of the wall. Therefore, no benefit of wall friction (δ = 0) was taken on the active side in the Frew analyses.

The build was put on hold due to a lack of additional funding and letting commitments. In February 2015 the site was acquired by an AXA Real Estate consortium in a deal worth £300 million. The project was re-designed with the application to build being approved in November 2015. By December 2015 the concrete central core of the original design was completely removed and construction of the new building commenced in January 2016.

Achieving the ‘Greenest Games Ever’, the Geotechnical Engineers Challenge The bid to host the 2012 Olympic and Paralympic Games included…