At 3,560ft (1,085m) the café and visitor centre at the summit of Mount Snowdon in North Wales is the highest building in the UK, south of the Scottish highlands.

Its predecessor – a run-down 70 year old building – was once famously labelled by HRH Prince Charles as ‘the highest slum in the world. In its place, the new facility – named Hafod Eryri – has been described as a real credit to those who designed and built it. It will be visited by over half a million people each year.

This project is defined by extremes: the granite clad building is designed to cope with savage weather allowing for wind speeds up to 150mph, annual rainfall of more that 5m and temperatures that drop as low as -20°C.

The centre’s remote site location also provided some unique design challenges. Accessible only by rail, helicopter and foot, all material had to be transported up the mountain by the UK’s only rack-and-pinion railway. This meant that the building elements and construction equipment had to be limited in size and weight, requiring flexibility in the designs and collaboration between the individual members of the project team.

Teamwork was crucial for solving logistical issues and successfully delivering the project. Every detail required input from Ray Hole Architects, Arup as engineer, and main contractor Carillion. However, simply maintaining communication proved difficult without any fixed phone lines on the summit. 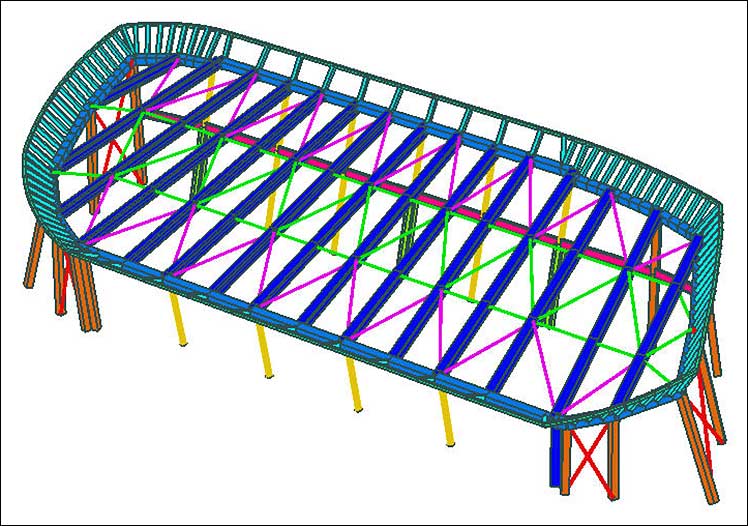 One of the most challenging design aspects was achieving the complex geometry of the steel frame with its varying wall slopes and curved layout. Arup produced 3D GSA models to understand how the asymmetric structure would work and developed 3D CAD models to get unambiguous data for the steelwork and cladding contractors. Ultimately this produced a better end product.

For the foundations, Arup worked with Carillion to resolve the logistical and quality issues involved in casting hundreds of tonnes of in-situ concrete on the summit of a mountain. The solution was to create bespoke precast concrete troughs designed to connect together on site. The concrete troughs were delivered hollow and filled with rubble from the demolition of the existing building, limiting the amount of waste removed from site and minimising the delivery of materials.

With sheer cliffs on two sides of the site and extreme weather conditions, it was imperative that construction time was minimised. To achieve this, the roof and superstructure were prefabricated as much as possible (considering that everything had to come up the railway) so that large sections could be dropped into place quickly. This effort meant the roof was built in just four days.

The roof also had to deal with unusual problems like being resistant to tent pegs – the previous cafe was plagued by campers puncturing the waterproof membrane when pitching their tents on the roof.

Ray Hole Architects maximised the building’s internal space by ensuring the perimeter columns followed the sloping walls. There is only one vertical column in the entire of the main building.

"A colleague once said that 'building difficult things in difficult places is where Arup excels'. That really struck a chord with me on this project." "Taking the architect's vision and turning it into something structurally sound, that - given the site restraints - would actually be buildable, kept us on our toes."

Read More
Structural Analysis The Architecture of the Dragonfly Wing