Infranatural invited Bruce Danziger (Arup) to design a bamboo bridge for the Here there be monsters installation at the Materials and Applications research centre, Los Angeles. With the help of Moritz Freund, Shuchi Hsu and Mecky Reuss the bridge developed into a curved and partially cut-away tube functioning as the primary stage from which visitors can interact with the water and its creatures.

“When I was invited to design a bamboo bridge to span over a fountain designed by others, I asked a former student, Shu-Chi Hsu and her friend Moritz Freund (young architects from Taiwan and Germany) to join me in designing the bridge setting up a relationship that is non-hierarchical in that I am not the leader and we share responsibility, decision making and hard work. We decided to call ourselves workshop: LEVITAS. Mecky Reuss, another young German architect, also joined our group”.

Taking as a starting point, the bending moment diagram of a propped cantilever, I made some sketches in Rhino. Working with the fountain designers, we designed the bridge to become a platform or stage area to view the fountain.

We transferred the geometry from Rhino to GSA retaining separate layers for different elements. It is a wonderful feature of GSA that the dxf file retains its separate layering when imported to GSA with the property card holding the layer names and the elements having the corresponding group and property numbers. 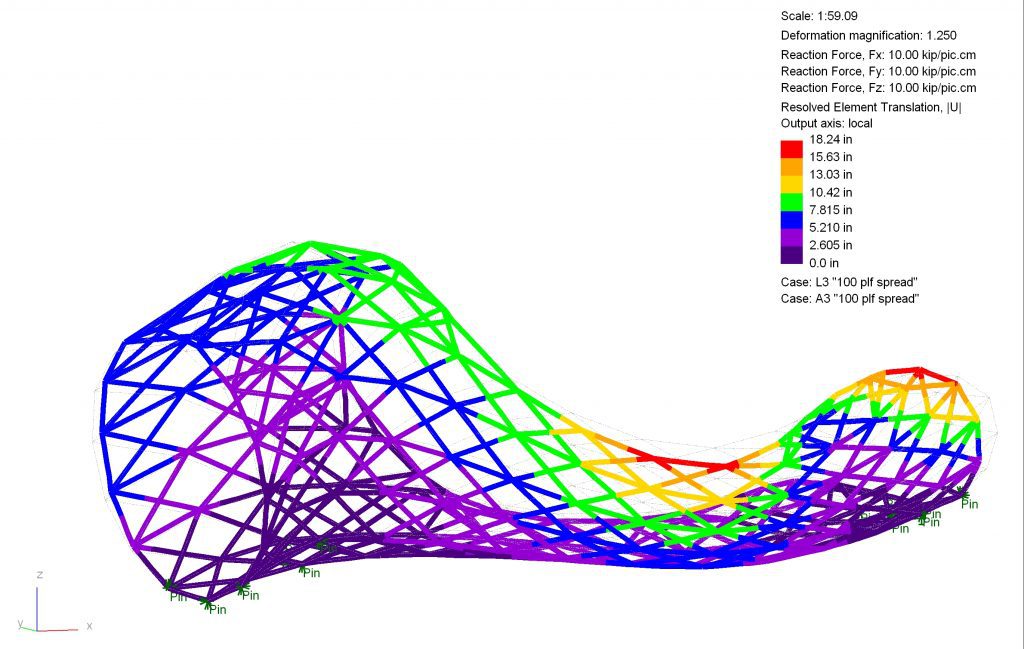 Using the shell of a model, the nodes can be deleted or copied over from a separately imported DXF file or spreadsheet. The elements can also be deleted and replaced with a copy of another imported DXF file. So the “Skeleton” of a model is everything minus some or all of the topology (node and elements).

We had to revise the support conditions to avoid locked-in stresses. The break-through was the flexible support detailing reflected in the analysis model to allow the structure to deform uniformly without concentrating stresses at the bamboo elements adjacent to the supports.

The temporary nature of the water installation prompted a raw, low-tech design approach to the bamboo bridge. Every piece of bamboo used was freshly-cut, green and untreated, allowing for natural wear and decay over the lifetime of the bridge. To further simplify the process, cable zip ties were selected as the primary connective material, as opposed to traditional rope ties. Unlike the conventional design/construction process, the shape of the bridge adapts to the nature of the bamboo and is liberated from the templates built by the computer. During its lifetime the woven bridge will remain in a state of flux, in both form and colour due to the inherent natural drying process of bamboo and its exposure to environmental forces.

“I think it turned out much better than the computer simulated model would have led us to imagine.” Bruce went on to to say. “Although the bridge embodies the essence of the structural diagram, and the shape we created digitally, its expression of form and character in both materials and construction takes on another quality. It’s very exciting for us that the physical bridge is NOT an exact representation of the computer model (unlike most contemporary architecture, which tends to be). The bridge takes on the nature of bamboo, thus freeing itself from the computer model.”

Złote Tarasy (Golden Terraces) takes its name from Złota (Golden) Street, one of the ‘metal streets’ established in the 18th…