Oasys MassMotion has been used to test the ability of the Arup Liverpool office to comply with physical distancing measures, with the aim of assessing maximum office occupancy and developing a strategy for people circulation around the office.

The aim of this work was to provide a clear understanding of the potential risks associated with the movement of people around the office and how the risks can be minimised by implementing office-specific measures such as a one-way system, closure of tea/coffee points and general reductions in the number of potential contacts in social areas in the lounge and kitchen. The outcomes of the work informed the ‘Arup Liverpool – return to office handbook’ and wider organisation strategy to keep our staff safe.

A suite of assumptions was developed based on experience to test the operation of the office. Meeting rooms were omitted, and tests for the impacts of staggered start time such as staff arriving over 3 hours in the morning, as well as the impacts of staff undertaking ad-hoc activities such as regular breaks for socialising, tea breaks and toilet breaks (every 30 minutes). 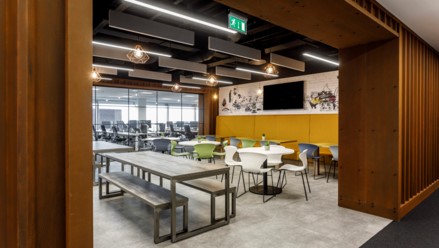 Two tests were carried out: maximum occupancy only and maximum occupancy with office specific measures such as a one-way system, closure of tea/coffee point, access/egress restrictions around female toilets, kitchen and printer area.

The tests provided guidance how to reduce close contact and time spent within 2 metres of each other. The outputs showed where pinch-points are likely to be for people dwelling and circulating around the office, which were then further tested to explore how specific measures achieved more favourable results and reduced the amount of time spent within 2 meters.

Merseyrail is a train operating company and an urban rail network critical to Liverpool and its surrounding areas. It is…

Every year, millions of Muslims visit Mecca in Saudi Arabia to perform a religious pilgrimage, which is one of the…