With population increasing every year, it is crucial that architects, engineers and planners consider pedestrian movement within their design for safety and to avoid congestion in our cities. Road traffic management is a constant challenge but, bearing in mind that cities are built for cars, then it is clear that improving the experience of pedestrians in and around our commercial buildings, sports and leisure facilities and transport interchanges is equally important. Advances in pedestrian simulation mean that doing this is easily integrated with building design and ongoing facility management.

We have probably all experienced long delays while exiting a subway station, stadium or concert hall and thought “Wow, why is this taking so long? Who designed this?”.

There will be several reasons, one of which will almost certainly be that the architects and designers simply weren’t provided with the means accurately to predict how people would move within their design in different scenarios; they couldn’t optimise the design to create an efficient walkway.

Imagine how much easier their job would be if they used modern pedestrian simulation software to predict how people will move within a confined space and how they will react dynamically to changes, such as an escalator breaking down. Then they could experiment with the digital model to test different options to improve the flow. 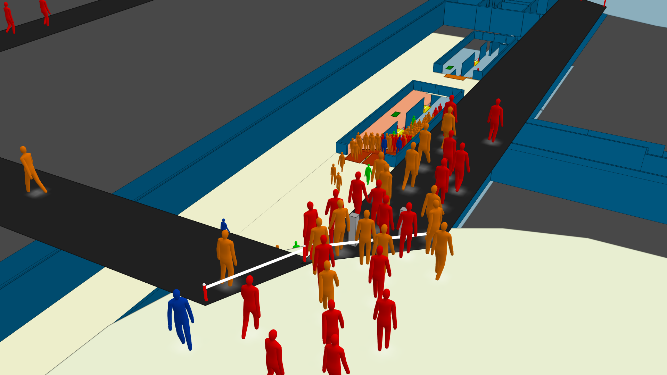 This would be equally true for public spaces outside of a stadium or subway station: for example, to improve safety of pedestrians when they are crossing at intersections or in a public space near a roadway, transport planners need to know where to place refuge islands and bollards so they enhance, rather than impede flow. 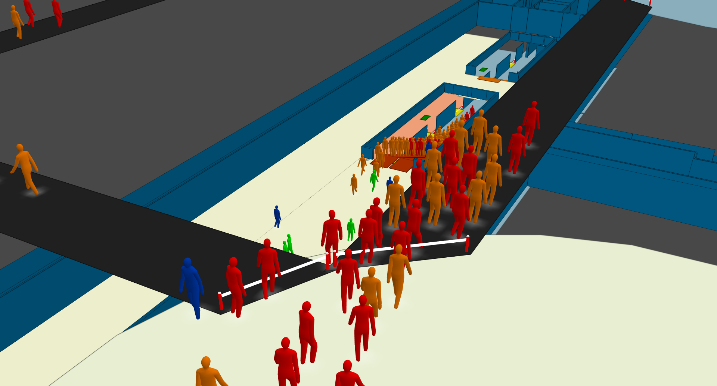 To visualize and analyse pedestrian behaviour, many designers now use agent-based simulation tools such as MassMotion from Oasys. As they can import their standard 2D and 3D CAD and BIM models to build the  3D models used for analysing how pedestrians will flow through their proposed design, this is neither as expensive or time-consuming as it used to be, and so the technique is rapidly becoming a standard part of the design process. 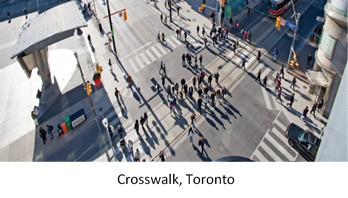 The software also allows planners to visualise how their design will look, and easily create animations of how people will move in and out of a building, travel up and down lifts and escalators, and queue up, no matter how complex the pedestrian flows. After all, its development was originally triggered by the needs of one of the most challenging of interchanges at the New York Fulton Center.

Right at the leading edge of pedestrian simulation is Oasys MassMotion. Its development team has consistently broken new ground with innovations such as real 3D analysis (not just 3D visuals), really simple integration with existing CAD models, viewing tools to share results and licensing options that make this Rolls Royce of pedestrian movement analysis, affordable for use on projects of any size.

Looking ahead, the MassMotion development team is actively researching how to incorporate real-time data, to give users a window on actual behaviour, reducing their reliability of physical and psychological predictions.

Thanks to the insights of teams like the Oasys MassMotion developers, pedestrian simulation is increasingly realistic and accurate, and will play a growing role in how we develop our built environment to meet the needs of our growing populations.

Oasys partners and resellers, CSPFea, organised a pedestrian simulation seminar with the theme ‘simulating the dynamics of crowds, regarding aspects of…

This article was originally published on the Oasys website on the 31st May 2012. It has been updated and republished…