With a main span of 120m, secondary span of 60m, and arch height of 40m, the award winning Infinity Bridge is one of the largest footbridges in the UK.

From the industrial revolution up to the 1970s, Stockton-on-Tees was at the industrial heart of England’s north-east. Then came the 1980s and the collapse of heavy industry, leaving the area desolate. Since then, Stockton has been reinventing itself, replacing the steel and chemical works with education and commerce.

One important aspect of Stockton’s redevelopment is Durham University’s Queens Campus on the Tees’s south bank. To make this a success, the developers English Partnership and Stockton-on-Tees Borough Council realised that they needed a footbridge to link the campus to the station and the rest of the town across the river.

In 2003 English Partnership organised an open competition with the Royal Institute of British Architects (RIBA) for a new footbridge. Expedition Engineering collaborated on their competition entry with Spence Associates. The team’s design was shortlisted to the final 5 and subject to a public vote in 2004. They did well in this and after a formal jury interview the client announced them as the winner. The project then stalled for 18 months while funding was finalised. With funding finally in place, detailed design commenced in 2007

While it had been acceptable to analyse the scheme design in 2D, the detailed design required a full 3D analysis. As Expedition were aiming to make the bridge as slender as possible, the geometry was crucial. To achieve this they drove the design from an Excel file containing all the project data, which then automatically created Rhino models using routines developed in-house and the Oasys GSA model using GSA’s COM application programming interface (API). The three programs were used not just for analysis, code checking, and visualisation, but also for form-finding to make the arches work at maximum efficiency.

The form chosen was an asymmetric double-span tied-arch taking the arch forces as tension in cables running parallel with the bridge deck. This enabled the structure to span the river without imposing large reactions on the banks. To reduce differential live load deflections, the connection between the two spans was made continuous. 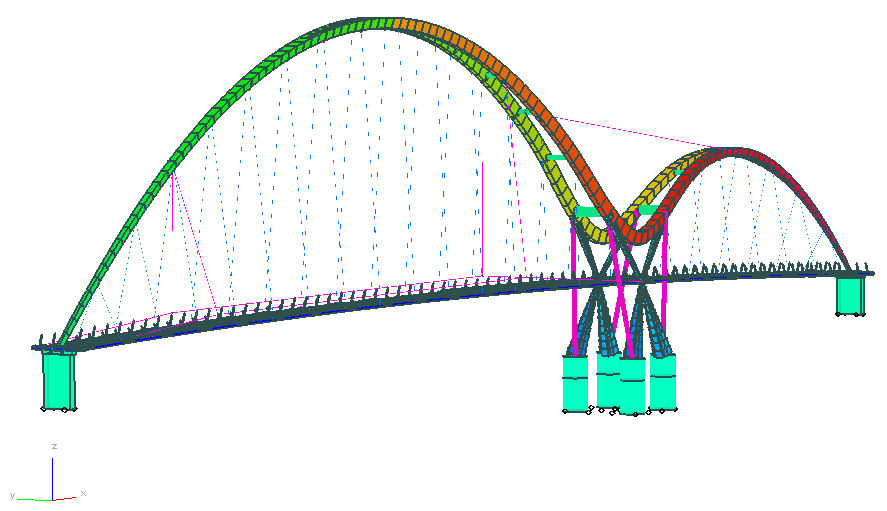 The loading on the bridge model did not just include wind and moving crowd loads, but also had to cope with an impact from the local river cruise ship: the Teesside Princess. The shape of the arches was optimised for the dead loads, including self weight. As the arch cross-section was also optimised throughout its length, constantly changing its profile, this proved a complex but ultimately successful task.

The design checks, all conducted in GSA, included static loading, moving crowds, dynamic behaviour (with tuned mass dampers), buckling, lack of fit, thermal expansion and construction stages. At the end of the project there were 650 load cases in 144 analysis tasks, resulting in a total of over 500 load combinations. Expedition used one GSA model to cover the entire bridge, plus additional models to examine detailed areas, such as the abutments. For these complex areas, the geometry was created in Rhino and imported directly into GSA.

During the tender phase, Expedition found that the best way to explain the construction sequence to the prospective contractors was through using Rhino models produced directly from the GSA stage model using in-house routines. As they had analysed the bridge, including temporary supports, at all stages from foundation installation to final service in the GSA model, this proved an easy task. Balfour Beatty eventually won the project and employed Cleveland Bridge UK for the bridge fabrication and Dorman Long Technology for the erection sequence design.

The first stage of the construction process was to install 16 steel piles into the river bed. These were topped by a concrete pile cap and four concrete legs which rise to provide a base for the steel legs that spring from the waterline to support the bridge above. The bridge itself is all steel, with the decks made from site-made precast concrete. To ensure perfect joints between the deck segments, the contractor used the previous segment as the stop-end for the next section.

The steelwork was fabricated locally in Darlington and transported in approximately 20m lengths. The arches were then connected on the bank in lengths of up to 90m and lifted into position. For the main arch, the North arch, this required using the UK’s largest crane, which had a lifting capacity of 1,200 tonne. The bridge ultimately used 450 tonnes of Corus steel, with 290 tonnes in the North arch alone.

The bridge was completed in February 2009 and opened to the public on the May Bank Holiday three months later.

The reaction from the public, media, and construction industry was overwhelming. The opening ceremony, with illumination and entertainments, was attended by approximately 20,000 people. Since opening the bridge is used by about 4,000 a day to cross between the town and campus.

Its name was coined by the locals, who saw its shape reflected in the waters of the river Tees forming the mathematical symbol for infinity. The bridge is now seen as a symbol of the regeneration of the region.

When bestowing on Expedition their supreme award for structural excellence, the Institution of Structural Engineers described the bridge as “an icon for the present and a landmark for the future.”

"Possibly the most sustainable bridge in Britain and the IStructE judges recognised that ..the design of the extremely slender arch has been justified by sophisticated non-linear analysis techniques.

The centre piece of the 15th Asian Games was the Aspire Tower, shaped to represent a colossal torch, which for…