Indian Institute of Technology (IIT), Bombay, have used Oasys Slope to carry out a study on the influence of soil nail parameters on the stability of slopes. This study was presented at Geocongress ASCE, Oakland, and is due to be published in the Ground Improvement Journal.

In the paper, the authors noted the following:
“The limit equilibrium modelling software Oasys Slope was used for analysing the slopes with and without soil-nails. It is user-friendly as well as time efficient and can be used for analysis of slopes with and without Nails, Geotextile, Rock bolt and Ground anchors. For soil-nailed slopes, it allows the user to feed capacity of nail head (slope facing) as a plate capacity. It also considers the saturated as well as unsaturated unit weights of the soil. It enables the user to analyse slopes with difficult terrain for a different variety of geotechnical projects, individual cross-sections and different calculation methods.”

IIT have purchased the special Unipac license for teaching and research purposes.

A summary of the analysis and results are outlined below.

Analysis
A parametric study was carried out by varying the nail parameters, including nail inclination, nail length etc. and slope geometry.
To perform the stability analysis, basic input parameters required for Oasys Slope were:
•    Failure criteria
•    Material strength parameters including soil, nail and facing
•    Factor of safety for materials
•    Position of phreatic  surfaces
•    Selection of approximate centre and radius of the slope circle
In the study, the Mohr-Coulomb failure criteria was selected for the stability analysis i.e. circular failure surfaces were selected. The input soil properties are unit weight of the soil, both in saturated and unsaturated conditions, cohesion and internal angle of friction of the soil. Slope stability analysis was performed with and without phreatic surface. For selection of the slip circle, it was assumed the slip circle should pass through the toe of the slope and no portion of slip circle should pass through the base layer of the slope. 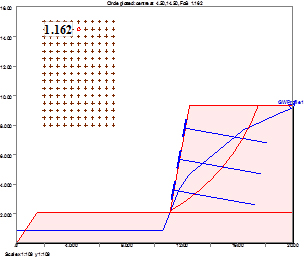 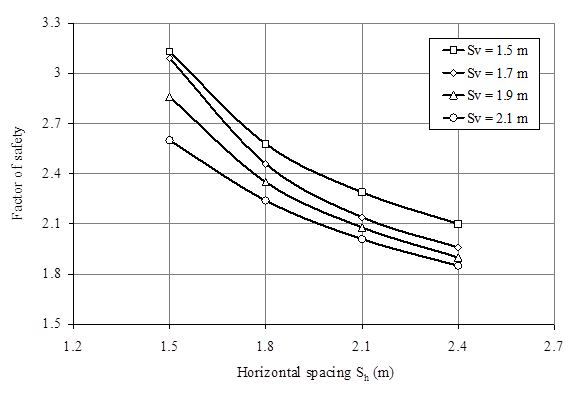 Influence of nail layout on the FOS of soil-nailed slope (5V:1H) 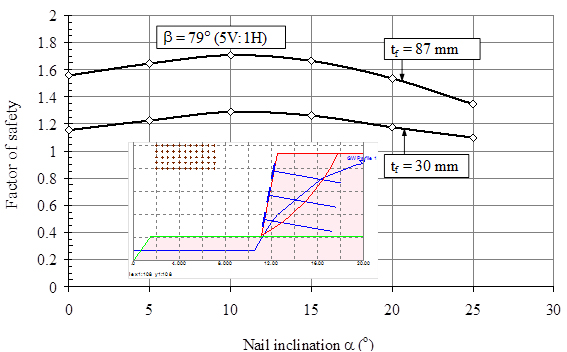 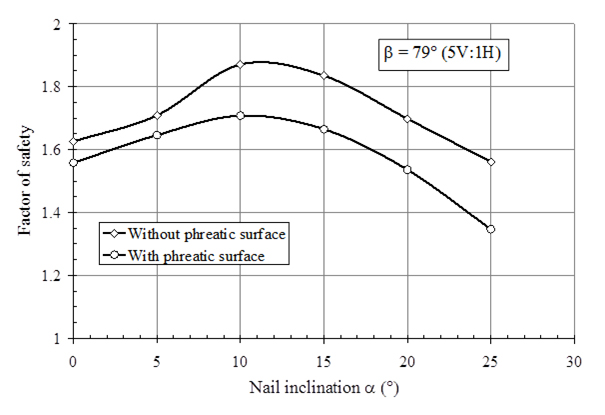 Variation of FOD with and without phreatic surface (tf = 87mm)

Factor of Safety (FOS) for various nail inclinations, nail layouts, slope facing thicknesses and phreatic surface locations were calculated. These results were compared to determine the influence of nail inclination, nail layout, thickness of slope facing and phreatic surfaces on the stability of soil-nailed slopes. Influence of all these parameters were studied and discussed.

Summary of results
Stability analysis was performed to study the effect of slope geometry, nail parameters and effect of rising water surface within the slope on the overall stability of soil-nailed slopes.
The study shows that with horizontal back slopes, the optimal nail inclination increases when the angle of the retained slope decreases. When the back slope increases the optimal soil nail also increases.
Two nail length patterns were studied:
•    Pattern 1, nail length decreasing with depth of the slope
•    Pattern 2, nail length increasing with depth of the slope
Pattern 1 was found to be effective for a 10.2 m high slope whereas Pattern 2 is found to be effective for 7.2 m high slope.
Rising water surface within the slope, increase in horizontal spacing and decrease in length of the nail reduce the overall stability of a soil-nailed slope.
Contribution of nails to the overall stability of soil-nailed slopes is dependent on their location and inclination with respect to the slip surface.