Adding further validations past the IMO and NIST

It is well known that validation is considered by engineers as being a key factor when deciding which software package to use for simulating evacuations.

Now the gap in validation studies for MassMotion with a focus on children and their movement in low-rise buildings has been filled by Edinburgh University Master’s students Alexandru Dragan and Codrin Mihnea Florescu. Their paper was highly commended in the biennial Oasys Project of the Year Competition to find innovative and new uses of our software…

MassMotion is currently verified in accordance with the International Maritime Organisation (IMO) 1238 and the National Institute of Standards (NIST) Technical Note 1822. Furthermore, a 2016 research project in collaboration with Carleton University provides insights and guidance into modelling elderly populations: data collected during fire drills was used in comparison with associated evacuation modelling results using MassMotion to create a validation case study.

Children present greater behavioural uncertainties. Stairs do not seem to slow them down so much, and speed/density curves may differ from adults, as they move faster even in crowded conditions. So, the factors built into the MassMotion algorithms are not always appropriate. However, MassMotion enables users to bypass the default adult settings during the project.

Drawing on data from previous evacuation trials in German, Spanish and Brazilian schools, different scenarios and essential differences in culture, number of agents, agent profiles and geometry were considered. The original Spanish school study had included a comparison between three other software packages and was provided as a benchmark comparison.

Slight alterations to parameters embedded in the model’s source code allowed for the unique attributes of younger population and school buildings.

Slightly more complex was the second limitation of the model, related to the speed/density relationship. MassMotion incorporates John Fruin’s Levels of Service to simulate the reduction effect that local density has on an agent’s movement speed. However, studies by Larusdottir and Dederichs have shown that the speed/density curves for young populations may differ from the ones for adults, as children tend to move faster even in crowded conditions.

In addition, the empirical data being used for validation exercises already includes reduced speeds due to crowding behaviour. If this data is used as input, there is a risk that the speed reductions owing to increased densities are applied twice, which would produce overly-conservative results. So, the study aimed to investigate whether discarding the model’s underlying imposed speed reductions (due to crowding) would generate more accurate results for this age group.

The imposed speed reduction factor was inspected as both On (default model configuration) and Off (manual override) for all scenarios together with the Default and Adjusted stair angles (vertical speeds equal to horizontal speeds).

The simulations are carried out based methodology described by Cuesta et. al and Peacock et. al. which ensure that enough simulations are run for each scenario in order for the results to converge towards an average.

In terms of the high-level results of all the 5 evacuation scenarios (total evacuation times and average evacuation times), the accuracy of the simulated data varies widely from scenario to scenario, and seems to be directly proportional to the level of detail of empirical input data (available in the studies). The most accurate results for the Spanish and Brazilian studies are offered by the Fruin Off Adjusted Stair simulation cases, which involved faster movement speeds, even in crowded conditions. The German study is best replicated by Fruin On Adjusted Stair simulation cases, which involved slower movement speeds and hindered movement in crowded conditions. The results seem to indicate that there are cultural differences that may be incorporated into simulations by choosing to use the proposed bypass methods.

In the Spanish school evacuation study, which also presented simulated data from three other modelling packages, it was seen that MassMotion is best in predicting the total evacuation times and average evacuation times, and also when compared with experimental curves using functional analysis. 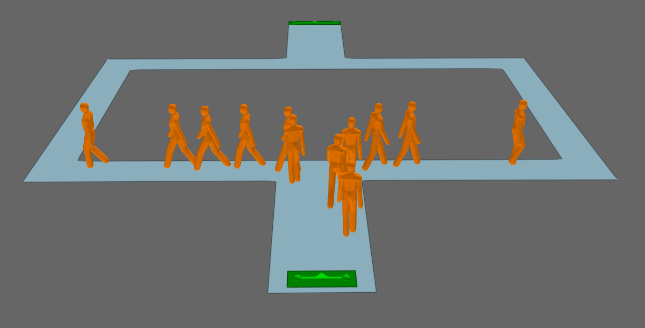 The final stage of the project investigated the influence of three key: total number of agents, their horizontal movement speed and their body radius. The social force algorithm coupled with the route choice algorithm form a highly complex representation of reality, but rely on Newtonian dynamics. The tests indicated that the algorithms’ complexity is still not sufficient for modelling some social interactions and that further research in this area is necessary. (Note: MassMotion 9.0 provides new tools for defining agent behaviour in response to internal agendas and external influences.)

MassMotion and Flow, the BIM-compatible 3D pedestrian modelling software tools developed by Oasys have been validated and verified by Arup engineers, demonstrating that…

To paraphrase Moore’s Law, the overall processing power of computers doubles approximately every two years – we’ve all experienced the…