The winner of the award for small practices in the Institution of Structural Engineer’s 2016 Structural Awards was Tristan Simmonds of Simmonds Studio for The Hive open air sculpture. Engineered using Oasys GSA the sculpture was originally designed for the British Pavilion at the Milan World’s Fair Expo in 2015 where it attracted over 3 million visitors and subsequently won the prestigious Gold medal for architecture and landscape. It is now open to the public at the Royal Botanic Gardens in Kew.

Standing at 17 metres tall and weighing in at 40 tonnes, The Hive reminds us of the importance of pollination by honey bees in feeding the planet through an immersive sound and visual experience. 1,000 LED lights dotted around its core glow and fade, while a unique soundtrack hums in response to the activity of real bees in a beehive behind the scenes.

Created in collaboration with artist Wolfgang Buttress, The Hive is an extremely complex aluminium structure made from 30,000 CNC* fabricated parts. There are 60,000 mostly-unique parts with 169,000 individual components. Yet, while it has won 15 design and architecture awards including a coveted Civic Trust award, it is only this year that The Hive has been acknowledged as a remarkable piece of engineering.

While The Structural Awards is undoubtedly a higher profile award, we were pleased to pre-empt this recognition for engineering excellence in the 2016 Oasys Competition for projects designed using our software. The Hive was a highly-commended entry.

Due to the huge number of elements and connections that required checking it was decided that the analysis model would need to be explicit as possible so that all parts could be checked in an automated way.

An attempt was made to model all offsets and connections resulting in 185,000+ element analysis models. The models were generated in CAD (Rhino) with bespoke plugins that provided a hierarchical/logical description of the geometry which could be subsequently linked back to the analysis results for processing in standalone C# applications (spreadsheets being unable to deal with these quantities of data). 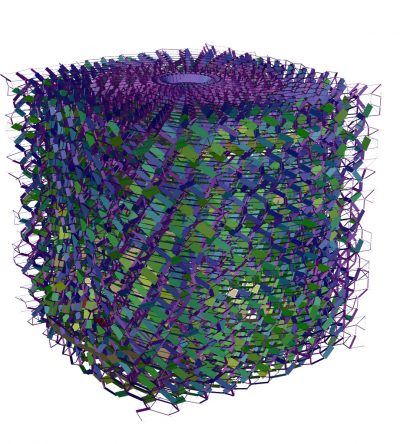 Oasys GSA was used for the structural analysis involving, dynamic modal, buckling, seismic and footfall analysis. Because of the large number of small elements and connections Tristan found that issues like the non-perfect pin behaviour of the connections and the simple details like radii to the internal corners of chord plates made very significant changes to the stiffness and the force distribution within the structure. He therefore had to analyse and check multiple assumptions as part of the design cycle.

A paper written by Thomas Li (Oasys), T. Ward (Arup), and W.J. Lewis (University of Warwick) has been published on…